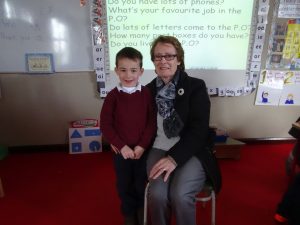 The boys and girls in Junior and Senior Infants were thrilled when Margaret, our local Post Mistress at Glinsk Post Office accepted our invitation to come to talk to our class all about her work in the Post Office. We have been learning lots about the Post Office during the month of March in our Aistear stations and were very excited to find out more! On the day before Margaret was due to call we worked together to suggest questions we could ask her. Some of the children wanted to know did Margaret get to drive a post van, others were eager to find out how many stamps she kept in her office and where all the stamps came from in the first place! Lots of the children have been to the Post Office many times with their parents but Finn is particularly familiar with the Post Office because it’s part of his grandparents’ house, Margaret is Finn’s Nana! 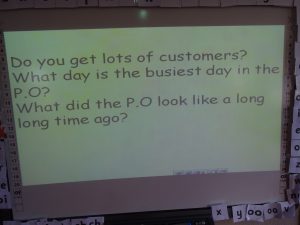 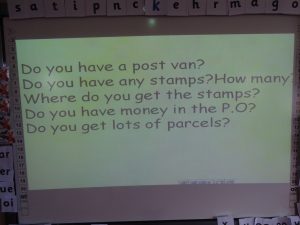 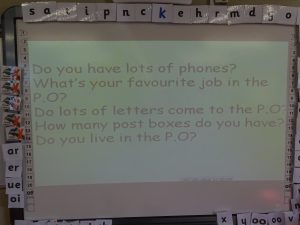 On Tuesday Margaret arrived and Lee welcomed her to our class and thanked her for coming. We showed Margaret our class Post Office set up in the role play area and our Post Boxes that we made from shoe boxes. Then the interviewing started! Margaret was very impressed with all the questions the children asked. We learned so much from her, she told us that the stamps come in boxes of 2,400 from the General Post Office in Dublin. We now know Thursdays and Fridays are Margaret’s busiest days in the Post Office. The children were interested in finding out what the Post Office was like years ago, Margaret told us that when she first started working in the Post Office stamps cost only 6p and that over sixty years ago the only phone in the whole of Glinsk was the phone at the Post Office! We were amazed to find out that the Post Office in Glinsk was first opened by Finn’s Great Great Grandfather 117 years ago! At the end of the question session, Lee, Elena and Finn thanked Margaret for coming and gave her a special thank you card that each of the children had signed. We reminded Margaret that we hope to see her very soon again – this time we will visit her at her Post Office so that we can post our letters that we’ve been working on! 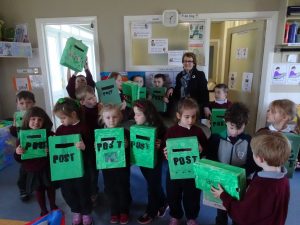 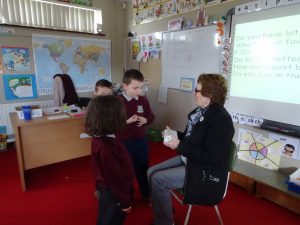 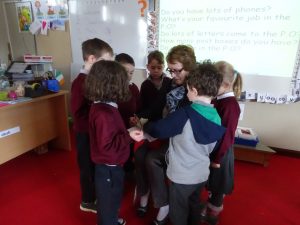