Niall McCormick from Colmac Robotics hosted another Lego challenge workshop for 3rd, 4th, 5th & 6th class. This follows on from the hill climb challenge last year and pupil were able to able knowledge from last years workshop to this challenge. Niall is an electronic engineer and he shared information about the work of an engineer with the pupils and also asked if we knew any engineers and what type of work they did as there are many different kinds of engineers.

As pupils worked in groups, he reminded them of the need to listen to each other in the group as each member may have different ideas and suggestions. Initially pupils had to draw a design on paper of what their robot might look like. Then the fun of construction began and as the day progressed Niall added in the next elements i.e. the battery packs and the sensors. There was a large black and white testing circle so that robots could be tested and modified if necessary.

Niall explained to us about binary numbers and that computers only understood 1 and 0 with 1 being on and 0 being off. We would need this so that we could programme the sensor on the robot to come on and when to go off !

Next we programmed the robots on the laptops using Lego Mindstorms software and the programme was set in a loop so that the robot would work within the testing circle. Then for the fun, teams challenged each others sumo robot and if you managed to move your opponents robot off the circle, you won!! There were many, many challenges with lots of little bits coming off but robots were quickly repaired. 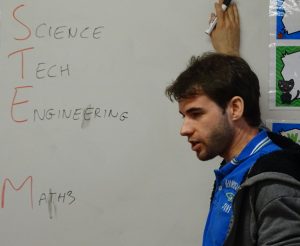 After all this Niall talked to us about STEM learning. We had spent the day using STEM subjects and learned through fun!

But Niall believes that STEM should have an added letter i.e. A and become STEAM!

He included Art as all the robots and a very aesthetic appearance when finished and creativity was need in design. It was a great day and take a look at photos from the day. 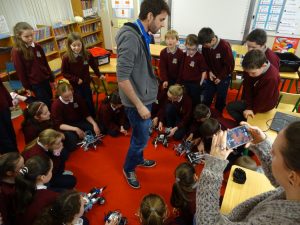 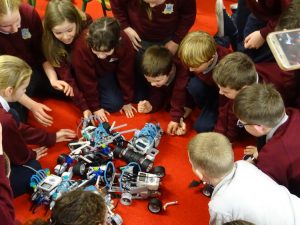 At the very end Niall asked us to make one big circle with all our robots pointing towards the centre. Then he stepped out of the circle and on “go” all the sumo robots set for battle!