By Gráinne NolanJanuary 5, 2021No Comments

The STEPS Young Engineers Award competition encourages 3rd and 4th class pupils and their teachers to explore the world of engineering by developing an engineering project that would help improve their local community. Pupils in 3rd class worked in groups of 4 on an engineering project of their choice. Each team had to come up with a team name, then think of a number of ideas and eventually focus on one. 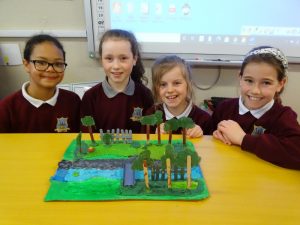 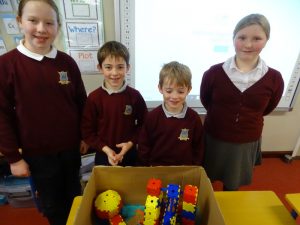 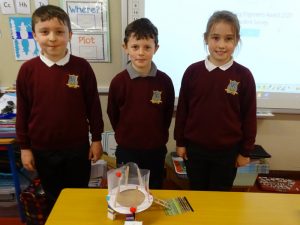 Once they had completed the brainstorming sessions, each team had to draw & label their design. Next the team decided on what materials they would use to build a model of their concept and at this point the practical part of the project really showed the creativity or each team and their ability to collectively solve any problems they encountered just like all real engineers! 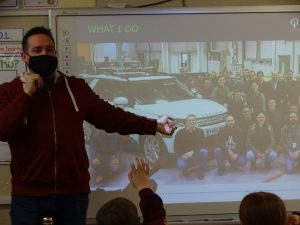 Throughout the weeks, Engineers Ireland shared a number of videos which looked at engineering across all aspects of life including the design & construction of the infamous Burj Khalifa Hotelin Dubai. As part of the project, the STEPS Young Engineers team matched up schools with a volunteer engineer for a school visit. We welcomed John Tynan, a software engineer with Land Rover Jaguar based at Shannon, in Co. Limerick.

John shared information about his career path with us and then talked about his current project with Land Rover Jaguar which is working on a Land Rover Discovery autonomous car as shown in the photo above. He talked to us about sensors and cameras and how much fun it is to work as part of a team on what cars of the future might look like. John’s talk was fun, inspiring and we had so many well thought out questions for him. He then looked at each teams model, their STEPS Young Engineers project book with all their ideas, drawings and reflections on the project and he was very praise-worthy of all their ideas, creativity and work. We were very proud to submit our entries to the STEPS Young Engineers award judges. Take a look at photos or our projects below and John’s visit to the school.