By Gráinne NolanNovember 4, 2019No Comments

Aidan Dockery from Heritage in Schools visited the school on the 22nd of October to share his collection of artifacts with pupils, in particular relating to the War of Independence and World War I & World War II. Aidan’s uncle fought in World War II and he had a collection of his uncle’s letters send home during the war. 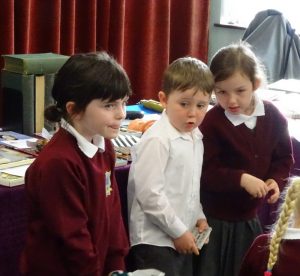 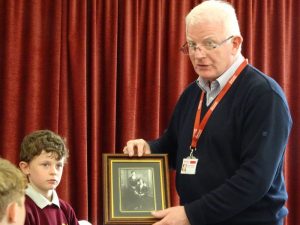 He had a great appreciation of and interest in history with a unique story-telling style that captivated his audience. Aidan also invited pupils to brig in their own artifact and each pupi got to share information with their class about their object. Aidan was also able to shed some further light & information with the children about their chosen object. 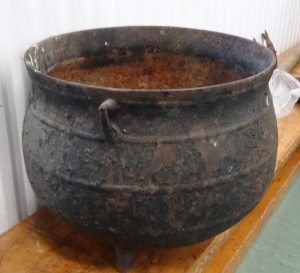 There was a great variety of artifacts inlcuding old photos, old money, gun money, rare medals in their orignal box from the War of Independence, old farming tools, a cobbler’s last, an old iron, cooking & baking utensils, an old newspaper, an record player & vinyls still playing perfectly with a a lovely sound, an original gas mask in perfect condition, and very unusual wine bottle cover hand-crafted in crochet, an oil lamp, pocket watch, an old camera, original mortgage documents written on parchment in beautiful handwriting and an old car horn. The pupils had a great interest in looking at each others artifacts and learned much from the day.