Glinsk N.S. was one of four schools in Co Galway to selected to work on the Branar Arts in Education flag programme sponsored by Acorn Life. Catherine Simon, a drama teacher from Branar and Creative Arts Ireland spent a full week in the school working with all classrooms each day. Initially each classroom chose a theme for the week and after Catherine got to know the pupils in each room, a drama contract was agreed by pupils in each room for the week ahead. 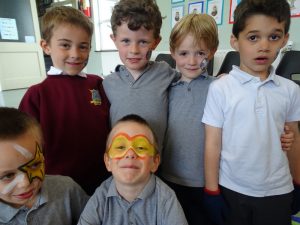 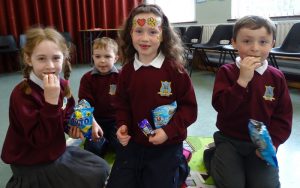 The infants worked on the theme of fairies, the middle room chose the famine and the senior room chose inspirational Irish women as a follow on to their website work – 1oo Irish Inspirational Women. 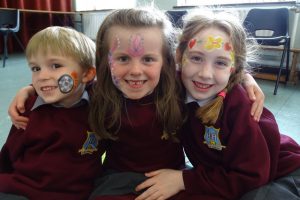 The infant classes went on a walk to visit the newly finished fairy garden in the church car park and along the way picked up materials such as twigs, moss & bird’s feathers etc to use with Catherine. During the week, the infants all decided on a fairy character, what job their fairy worked at and what their special superpowers were. They made magical fairy potions and used the materials they collected to make imaginative fairy creations. On their final session with Catherine they had a special fairy party and Catherine did face-painting for all the pupils. Take a look at some photos of their work below.

Pupils in the middle room began with some drama games such as “Do what I say, not as I do,” doing the opposite action to an instruction. Working in pairs, they looked at The Potato Diggers painting by artist Paul Henry as an initial starting point and discussed what the image meant to them.

Pupils also imagined they lived during the famine and each family assigned the roles of mother, father and children. Using thought tracking technique they expressed their devastation at the failure of the potato crop and their fears and worries for the future. 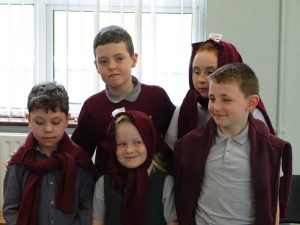 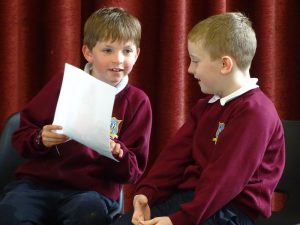 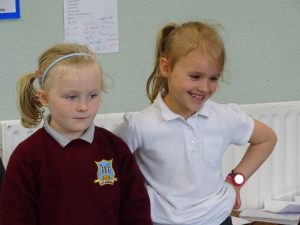 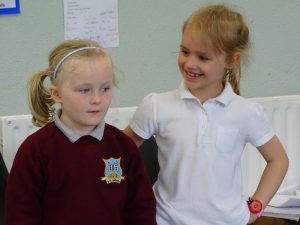 Pupils also learned how to use conscience alley to explore whether it would be best to go to the workhouse or travel to the harbour. All pupils in all class really enjoyed working with Catherine and as a follow on to her work, each room have continued to work on their chosen theme and this work will be submitted to Branar as we work towards achieving the Arts in Education flag.