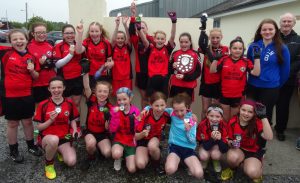 Members of the Connelly family made the presentations to the winning schools on the day in front of a large group of supporters gathered. Thanks to James Shevlin, Stephen Neary, James Fannon & Eamonn Hegarty for all their help coaching and encouraging both teams on the day, setting up the pitches in advance and to Mary Timothy & Maria Fitzmaurice who helped provide refreshments afterwards.