Martin Curley from the Heritage in Schools scheme has worked with pupils in the senior classroom for the past five weeks. Pupils researched their family tree, using online census records and online marriage records which became available last year. They researched Civil Parish Maps on http://www.johngrenham.com and learned about landlords and “The Big House” using http://www.landedestates.ie 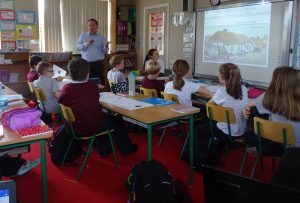 Pupil’s also researched the meaning of their family crest and drew their crest. They looked at the impact of the famine on Irish villages and in particular Ellis Island in America as the main port of call for emigrants during the late 19th and early 20th century hoping to start a new life.