Pupils from 6th class, parents and teachers attended the Maths Eyes Awards in Dublin on Wednesday the 24th of May. Glinsk N.S. pupils were one of four schools chosen to meet the Minister for Education, Mr. Richard Bruton T.D. at Merrion Square in advance of the awards ceremony in the afternoon. The minister met each group from the four schools and talked to pupils about their winning entries. 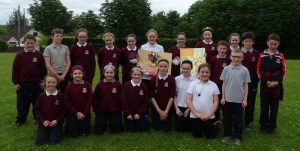 After meeting the Minister for Education, the group went to Dáil Éireann with Mr. Michael Fitzmaurice T.D. for refreshments, meeting plenty of Teachtaí Dála along the way! The Maths Eyes awards were held at Tallaght I.T. in the afternoon and were presided over by Mr. Thomas Stone the president of the college. Congratualtions to Gabrielle Kilcommons and Ava Joyce who were both winners in the respective categories U11 and U14. Gabreille was also the overall national winner in the U11 category. Both pupils were presented with beautiful glass trophies on what was a very proud day for their parents. Thank you to all families, supporters and well-wishers who greeted our return to Glinsk with bonfires.

Take a look at photos from the day below.