The boys F.A.I. soccer finals took place on Thursday 15th at Donamon with Glinsk N.S. taking on Granlahan N.S., Woodbrook N.S. and Aughrim N.S. They gave a great team performance throughout all the matches winning each match to go through to the final against Loughglynn N.S. 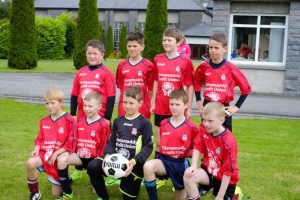 The final was the fourth match in a row for the boys and in very difficult wet conditions, Loughglynn proved too strong on the day but the team performance augers well for next year. Thanks to Martin Hegarty & James Shevlin who coached the team on the day and the supporters who turned out on the day. Well done boys on a great team performance throughout the day.

The girls F.A.I. soccer final took place on Monday 19th at Donamon. First up, the girls had a great win against Loughglynn N.S. Following this they were narrowly defeated by Threen N.S. Next up they beat Woodbrook N.S. to play Threen N.S. again in the final which was a tight match. The girls played brilliantly coached by Ms Quinn, Stephen Neary and Ms. Nolan going on to win 4-2 ending the year as they started – champions!

The team were delighted to accept the shield to add to their impressive collection from the year, being one of the most successful teams in the school! They won the Cumann na mBunscol mini-sevens county final, the Mark Fitzmaurice shield, the Cumann na mBunscol Championship 7-a-side county final; the Noel Connelly memorial shield and ended with the F.A.I. soccer title. 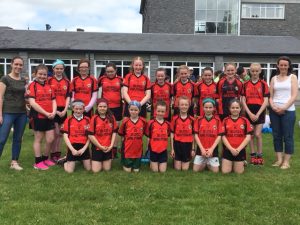 On both days of the F.A.I. soccer finals, the Parents Association kindly sponsored refreshments in Cuisle restaurant for all the teams and pupils who came along to support which was greatly appreciated by the pupils. The team returned victorious to the school with bonfires burning and many supporters gathered to congratulate the team. Well done girls.