Following on from their Cumann na mBunscol area final win, the girls team traveled to Loughgeorge on Wednesday the 18th October with a large group of parents & grandparents coming along to support the team for the Cumann na mBunscol Mini 7’s county finals. The girls played great football all day in very cold conditions and came up against schools with a large enrollment. 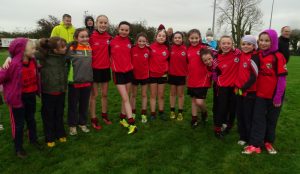 In the group stage they played Gael Scoil Uí Cheithearnaigh from Ballinasloe, and Coldwood N.S., winning both games convincingly. After this they had a well deserved break and a chance to enjoy a warm cup of tea! 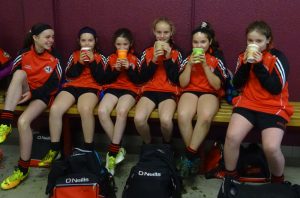 In the semi-final Glinsk overcame Kilbannon N.S. to qualify for the county final for the second year in a row which is a great achievement. They played Roscahill N.S. who played a game less in their group stage and they proved to be a very strong opposition going on to win the match.

Well done to all the girls and coaches on making it to the final for the second year in a row which is a great achievement and they look forward to plenty more football later on in the school year. Proud supporters lit a bonfire to greet their return to the school in recognition of their achievement. 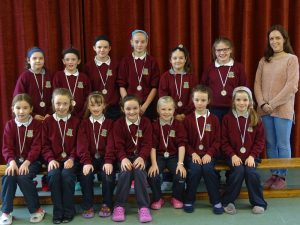