Following the area final blitz held at Glinsk G.A.A. pitch the girls final took place at Loughgeorge on Tuesday 30th May against Lavally N.S./ Brownsgrove N.S. for the county final. 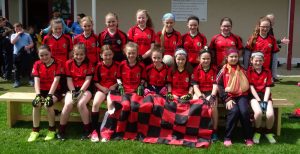 The girls put in a great team performance in what was a tight match, fighting hard for every ball. Late on in the second half the team kicked several points in a short space of time to finish with a great score of 2-13 to Lavally/ Brownsgrove 2-2. It is a great achievement to win another county title following on from their Cumann na mBunscol Mini 7’s county title last October. Thank you to the large number of supporters who traveled to support the team and all who lit bonfires and turned out to celebrate our victorious return. 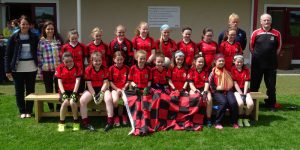 It was a great day for all the coaches involved with the team, teachers, pupils, parents, grandparents & neighbours who supported the team on the day! Well done girls on another county title! Check out some photos from the day below.

Mr. Shevlin presented the county medals to the whole team and he reminded us all again of the history this team has made by becoming the first ever girls team to win a county title. In addition not many teams win 2 county titles in the one year!