Pupils in 6th class received the sacrament of confirmation on the 20th of April in St. Michael’s church Glinsk. They had been busy preparing for this sacrament for weeks both in school and through the parish based programme – You Shall Be My Witnesses. This programme was facilitated by parents as team leaders and also Marie Barlow who helped with leading the programme. Thank you to Caisléan Óir who hosted these parish meetings for pupils and parents from both Glinsk N.S. & Creggs N.S. Mr. James Shevlin visited the group to speak about the the Pioneer Association to the pupils and this was his last official public engagement as President of the Pioneer Association. It was a fitting occasion as James’ first official engagement as president took place in Glinsk which is testament to the importance of you own local parish to James. 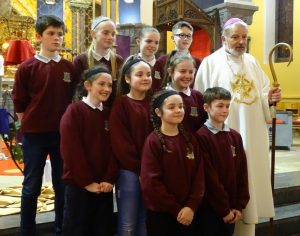 As part of their preparations, the class accompanied by parents, team leaders and parishioners attended the mass of chrism on Holy Wednesday in Sligo Cathedral. Oils that will be used in all churches in the diocese for confirmation & baptisms etc were blessed at this mass and priests of the diocese renewed their priestly vows. 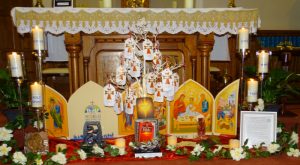 A penitential ceremony and ceremony of light took place on the Wednesday before confirmation for all four schools. The altar was prepared beautifully by the parents and altar society with the Tree of Life as the centre-piece. All pupils wrote their name on a dove which was placed on this tree with many symbols connecting to other sacraments such as baptism, penance, fruits & gifts of the Holy Spirit and symbols representing the World Meeting of Families surrounding the tree. 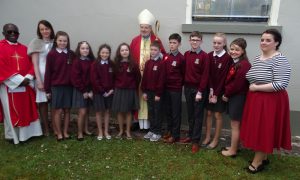 Thank you to all who prepared and served refreshments after this ceremony and on the day of confirmation for all families visiting St. Michael’s church. The ceremony was streamed live to the school hall so that everyone attending the ceremony could be comfortably seated. Thank you to all who prepared the church inside and out, the altar society, the parish council, traffic wardens, all who had the church grounds, car park flowerbeds and the new fairy garden looking so well. The confirmation ceremony celebrated by Bishop Kevin Doran was enhanced by lovely singing from the choir and pupils from Glinsk N.S. & Creggs N.S. read the readings, prayers of the faithful, communion reflection and brought the gifts to the altar. Congratulations to 6th class and their teacher Ms. Roughneen.